Start typing and press
Enter to search
Skip to content

The following essays are recollections of outstanding snippets from my childhood. Moments in time that I vividly relive when I encounter specific smells. The smells in my memory and mind are abundant and all welcome regardless of the emotions they evoke. I will share with you my unique experiences that are intrinsically bound to scents, giving essential emphasis on memories associated with Perfume 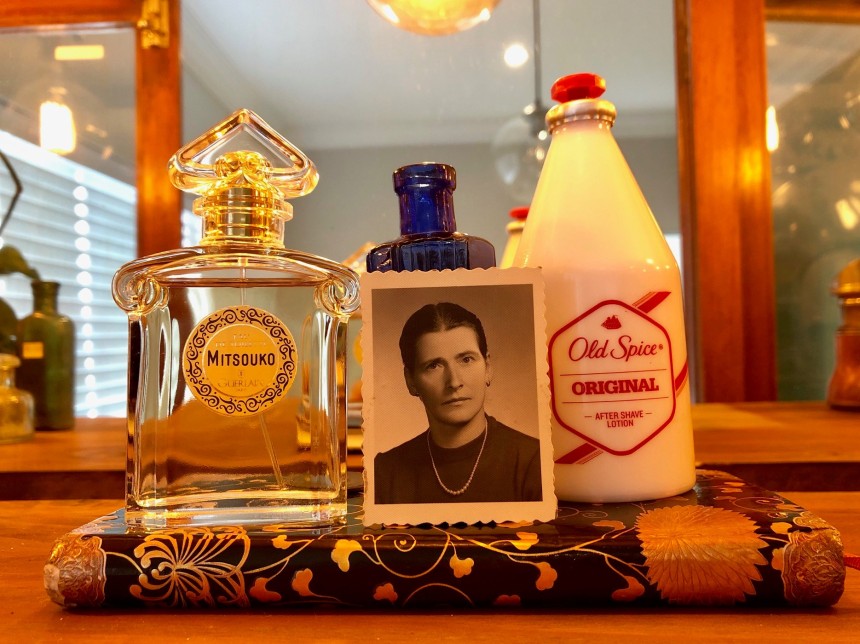 I spent my childhood years living in one half of a modest semi-detached house in Yeoville, Johannesburg. Nonna Francesca and Nonno Gino (My Dad’s parents) lived in the other half.

I absolutely loved my grandparents, especially my Nonna as she gave me all the love, attention and trinkets a little boy could ask for. From the moment I arrived home from school (which I hated vehemently), I would dash next door to my second home where I would forget about my anxieties. I would inevitably find Nonna in the kitchen busying herself with something enticing. I would always hope she was baking a cake or making gnocchi as she would allow me to help her – My choice job was thumbing the small cylindrical dumplings into disfigured Gnocchi – Most days she was having her lunch, which was typically Bruschetta: toasted Ciabatta bread, rubbed with garlic, then topped with olive oil, and chopped basil and salty tomato. The aroma from those simple ingredients – especially the bright basil – would waft out her kitchen door and impregnate my mind with one of the most distinct scent-memories of my childhood. On winter afternoons, in her grey, concrete garden, she would burn the planks of tomato-crates under a make-shift grill, laden with Glossy Red Peppers. The fragrant smoke, from the fire, would float over the wall separating our gardens, and call me to watch her roasting. The scent coming off the blistering peppers had a smoky tanginess and a mouth-watering sweetness from its sweat caramelising on the skin. The perfume coming off the fire was a comforting effect on me in the lonely and uneasy twilight.
When Nonna was too busy to entertain me, I would liberally wonder through her respectable house. However, I was always apprehensive to pass the kitchen’s threshold and into the rest of the house, as I would have to manoeuvre my way past the reproving glare of the rigid, Zio Vincenzo (my grandmother’s brother). He would sit ominously quiet on a bench in the dark corridor – A stubborn Sentinel! One of my favourite places (and the first room to habitually visit) was her TV room. Not because of the TV! (No Mam, watching “Knight Rider” in black and white was no fun) instead, it was the old records and a record player that I would play over and over. Best of all was, a cupboard that hid a conspicuous packet of jelly babies from which I would milk daily. I would never take too many as I did not want to alert anyone of my pilfering. So I would just take one or two of my favourite flavours at a time: “Artificial Black Current” and “Faux Lemon” would be the first to vanish from Nonna’s stash; and by the end of the week all that was left were a few “Replica Orange” and “Ambiguous Green” flavoured jelly babies that not even my brother bothered with. But the room that intrigued me the most (and remains a mystifying space for me) was her bedroom. Most of her personal effects were kept in this room. Entry was not encouraged and touching impermissible. But every now and then, when Nonna was deep in thought, tackling a cross word puzzle and Zio Vincenzo had finally succumbed to caffeine deficiency, I would slip into her room and carry out a hasty reconnaissance. Her curious cupboards were never unlocked, and her elusive bed was too high for me to climb, leaving me with limited areas to explore such as her bedside tables and the mantel piece. Small bowls of jewellery; jars of powdery make-up; and weighty metal brushes and hair clips lay neatly on the polished flat surfaces. The smells in the room were complex and unique to her. As you walk in, you’d be met by top notes of pink powder and a soapy cleanliness. Craftily, a perplexing heart reveals itself. It is intoxicating, like a drag of an Opium Pipe. But the sounds of footsteps on the Oregon floor in the corridor pulls me from the trance and realize, it’s time to get out. And it is at this time that the heady and earthy, almost animalic, odour is exposed, ultimately forming the base. It is a perfect blend of Guerlain’s “Mitsouko” with a glimmer of “Old Spice”. The fine oak moss, lilac and cinnamon (of Mitsouko), seasoned with slivers of Aldehyde, Tonka bean, and Musk (of Old Spice) gave the room a superior and genteel atmosphere. But then, operatically, my Nonna’s rural past would be betrayed by: Guerlain’s’ use of carnal and earthly Rose, Ripe Peach and Jasmine; and thin slices of Raw-Red ingredients of Geranium, Carnation and Pimento from the dregs of the bottom of an “Old Spice” bottle. The contrasts that Mitsouko and Old Spice have in their individual compositions followed by the interesting juxtaposition of these two perfect strangers, is a representation of my Nonna – Francesca Lattanzio: A woman who was born in a tumultuous era. She endured hardships that are totally foreign to me. Life was not hers to indulge in, rather it was an arduous mountain to climb. With 5 children she endured the devastating aftermath of World War II. This led to her eventual immigration to a not-so-welcoming but very foreign country. However, Francesca was a fiery character who used her raw passion and rustic heart to fight viciously for a dignified existence. And with her great intelligence and abundant wisdom was able to cling to the luxuries and indulgences of enlightened culture she left behind..
Although I only knew her for a quarter of my life, she has never left me.